Promise Rings often misunderstood as engagement rings signify just what it says, a promise. These rings most of the times named as purity rings, pre-engagement rings, or commitment rings. They are oh so special & popular among young generations of today. The concept of giving promise rings might sound new but the tradition of using rings as a symbol of love or commitment has existed since ancient times. It’s a pre-matrimonial or pre-engagement trend which is still unknown to many people, read this hub to know the meaning of promise rings, the history behind these rings, what do they symbolize, why you should give one to someone, and how do they differ from engagement rings.

What Is a Promise Ring and Its Significance?

The meaning of promise rings varies between couples, but it mainly symbolizes a promise which is being made. They are a symbol of love, friendship, devotion, or a commitment of getting married in the near future. It’s not essential that a promise you make should be just for a marriage, but it can be a promise of engagement, commitment to one another or anything else. A promise ring can be gifted either to your friend, parents, kids or to a special someone. A true definition behind presenting a ring differs from couple to couple; you can even give a ring, in return, of getting a promise of leaving any bad habit like drinking or smoking from the significant other. It is more than just a ring; they are available in a variety of shapes and styles like a heart-shaped diamond ring, plain diamond, gem-studded bands, a yellow gold, white gold or platinum rings and a lot of other choices!

Don’t you feel like knowing when did the tradition of promise rings actually come into existence? The tradition actually dates back to several hundred years. In ancient times, bishops used to wear promise rings as a symbol of a spiritual marriage or union with the church. During the 2nd century BC, Roman brides wore these rings to signify permanence and strength, it is to be believed that Roman men claimed their women by presenting this ring. The promise rings originated in England in the 16th century, named as posy rings because they were engraved with romantic poems or short messages. During the Victorian or Georgian eras, acrostic rings were introduced, gemstones engraved in these rings were arranged to spell out a word such as regard or love. It’s only in the past decade that promise rings have become a popular trend. Earlier only the men used to gift a ring to women, but today both a women or men have opportunities to gift this ring. Also known as purity rings, purity rings have a great significance, they denote loyalty and fidelity. The reason why promise rings have conventionally been worn on the ring finger of the left hand is that there’s a vein inside which runs straight to the heart.

How Do They Differ From Engagement Rings

So, dear readers, I’ve always thought of explaining the real truth behind promise rings and how they’re different from engagement rings.

I hope you’re now well educated about the topic, so now how you would choose a promise ring?

Why depend on the mandrel set and plastic ring sizer when you can try printable ring sizer or the string test to measure the ring size using the ring sizing chart shown below: 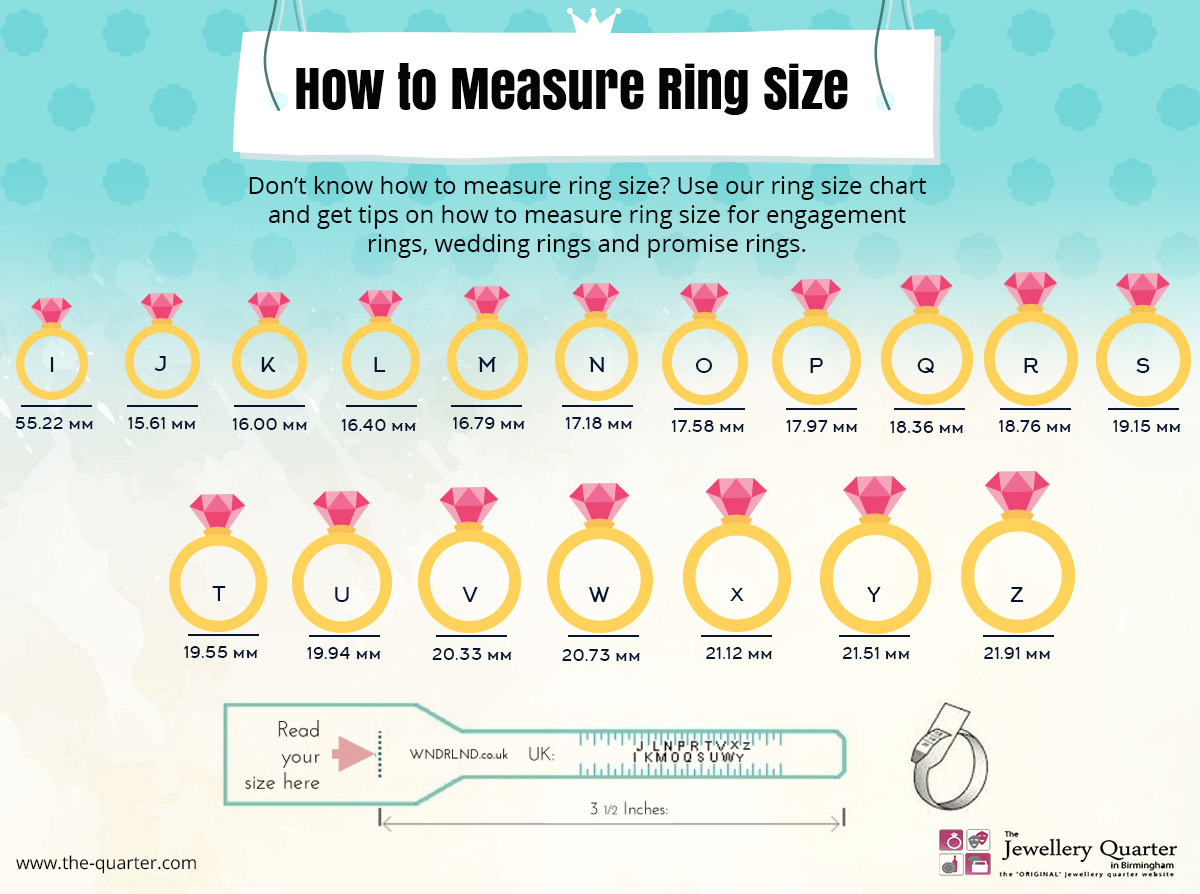 Yes! This chart will let you know your ring size without having to spend on mandrel set or ring sizer. How, you ask? Well, we have mentioned the names of the methods above and to practically implement them, read further.

This method requires you to know the diameter measurement of a ring that fits the fourth finger of the left hand.

Like the previous method, in this method too you require a printed copy of the ring size chart given, and besides that, a plain piece of string.

Stating these two methods, we would also like to tell you that printable ring sizer is not a professional measurement and accuracy discrepancies may occur owing to various reasons, printer settings and stretch of the string being two of them. So, it’s better to consult a professional jeweller if you have doubts.

Well, this was just an idea that could help you get your ring size but we have also listed down some easy-peasy ring sizing tips, so go ahead, read and try it:

We have only told you about the ring size in this blog, you still need to figure out what style you want to go for. If you have the ring of your choice in your mind, you can simply explore our website and approach the jeweller whose collection you like. If you are not sure of the ring type/style, then also our jewellers’ collection is likely to impress you. So, in the end, we would only like to say, Happy shopping!

Valentine’s day is the day when two people in love show their affection for each other and usually exchange gifts. It is a day to treat your lover to something special, jewellery can make an inspired gift choice; a lasting reminder of your love. It’s difficult to choose the best valentines gift for your beloved from the amazing range available. It is advisable to select a gift with personal appeal, including gold, silver, diamonds, etc. Your gift should reflect the style, taste and personality of the recipient. The idea of gifting a jewellery piece to the one you love is unique and incredible. It will not only brighten up the day itself, but also be a source of joy for years to come. Treating a loved one with the gift of jewellery is the perfect way to make them feel special.

Nothing says ‘I Love You’ quite as effectively as jewellery. Choosing jewellery for a valentines day is a daunting task because it follows an extremely difficult path where you not only have to match the standards of choice of your girl but also manage your budget efficiently. Valentine’s Day gifts may include eternity rings, bracelets, earrings or other statement jewellery available in Birmingham. The Rings of Birmingham jewellery shops can be the ultimate valentine’s day gift. Eternity rings are bound to take anyone’s breath away. Buying rings is a serious commitment and expression of undying love and taps into the true meaning of the day. Exchanging rings on the day is far more meaningful than giving other gifts.

One of the top destinations for jewellery lovers is none other than the beautiful city of Birmingham. Every jewellery shop in Birmingham has got an amazing collection of jewellery. The spark and shine of high-quality jewellery will never fail to impress your valentine and make her day extra special. Shopping jewellery from the stores of Birmingham can be an overwhelming experience. Every item here is itself a reason for you to celebrate.
To find jewellery stores in Birmingham, log on to The Jewellery Quarter Birmingham now.